(OR WHY PODIATRISTS LOVE ORTHOTICS)

You have heard about them, well here are pictures of them: FLAT FEET!

These feet belong to a 26 year old pilot. it is a good thing he flies and not runs. When he walks to the end of the terminal he starts getting pain from his lower leg to the inside of his ankle and right down to the foot where it meets the floor. The more he is on his feet the more it hurts.

In this monograph I am going to discuss in simple language (I hope) how the foot functions normally, why being too flat can cause problems and some things you can do about it.

Our feet are engineering marvels. Every step we take our feet need to do two exactly opposite things. First when they land on the ground they need to get flexible so they can adapt to the varying ground surfaces. Then they need to get rigid so the can propel us forward with strength.

The getting flexible part is called PRONATION. It happens to every foot with every step. Pronation by itself is not evil; it is necessary. A pronated, flexible foot can adapt to clumps of grass, little pot holes and other variations in the ground surface. Don't forget that this process was developed during the eons we walked on grass, sand and dirt not in shoes on hard surfaces.

If the foot remained pronated as we push off, however, problems happen. Mechanically it would be like trying to run on wet sand: very inefficient. In lay terms a pronated foot appears flat, like out pilot above.

In normal gait one foot is on the ground as the other foot is in the swing phase.  As the swing phase foot passes the ground support foot the foot on the ground goes through a process of increasing the arch height. This process is called SUPINATION and it leads to a very stable foot. Supination usually results in a foot with an arch. 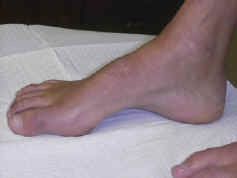 This picture is an example of a foot with a very high arch. In medical speak it can be called a supinated foot. In lay running magazines it might be called an "under-pronator." The foot is very stable (as such it is prized by ballet teachers). The lack of shock absorption it exhibits makes it quite prone to stress fractures.

Such is the life of a foot: pronation followed by supination, followed by pronation ad infinitum. Every foot needs some supination and some pronation. About 40% of all feet have just the right proportion of the two.

10% of feet exhibit a little less pronation than is considered healthful. These are people with high arches. These feet lack natural shock absorption and frequently get stress fractures and ankle sprains. In running magazines these people are called "supinators" or by the unusual term "under-pronators". (That is like calling a cheap person an under-spender)

50% of the population clearly pronates (flattens) too much. These are the ones called over-pronators by the running magazines. These are the subject of this article. If people have always marveled at your flat feet or if you see that there is no arch at all in the footprint left by your foot by the pool or spa, you have flat feet.

Like a forward pass several things happen to your feet when they pronate and most of them are bad.

HIP PAIN. When your feet pronate they take the whole leg with them. The foot is connected to the ankle and the ankle to the leg, etc. When the foot pronates your leg rotates internally. If you put a dot on the center of your  knee cap you would see that as your feet pronate the knee caps start to point toward each other. This can cause pain in the hip with internal rotation. While hip pain with pronation is possible, it is not all that common.

KNEE PAIN. Having the knees point toward each other causes knee problems, however. This knee problem is not the "internal" kind involving the anterior or posterior cruciate ligaments or the menisci, but more with knee and patella alignment.  I see this frequently in adolescent girls, especially those playing volleyball and basketball.. Often when the pronation is lessened, so is the knee pain. Before having knee cap alignment surgery it is good to at least investigate the role the feet play on the knee pain.

TENDONITIS. A partial role of a number of the muscles of the lower leg is to stabilize the foot. They send tendons down past the ankle into the foot to give it support. Many times, like with our pilot, these tendons have too much stress placed on them. This is especially true of the posterior tibial tendon and it can either fail, rupture, stretch or just plain hurt. This condition is called POSTERIOR TIBIAL DYSFUNCTION (PTD OR TPD) (literally a poorly function tendon) and is a quite common problem in our society. the only thing unusual about our pilot is his young age for this condition. Usually it happens to those of us a little more, ah, mature. PTD does not happen all at once. It develops little by little over a lifetime. Once the posterior tibia tendon stretches, the ligaments of the arch stretch and tear. The bones of the arch then move out of position with body weight. The bones of the arch then move out of position with body weight pressing down from above. The foot rotates inward at the ankle in a movement called pronation. The arch appears collapsed, and the heel bone is tilted to the inside. The deformity can progress until the foot literally dislocates outward from under the ankle joint.

ARTHRITIS. Having the foot flatten excessively causes the joints of the foot to move beyond their usual and normal range of motion. This excessive motion can lead to an early deterioration of the joints. This deterioration is called arthritis. Untreated severe pronation almost always results in degenerative joint disease. This joint disease can get so severe and painful that the joints get ruined.

PLANTAR FASCIITIS. As the foot flattens it also elongates. This elongation can result in an excessive pull of a ligament-like structure called the plantar fascia on the heel bone. The resultant inflammation is called plantar fasciitis. For a complete discussion please see my page on >

BUNIONS AND HAMMERTOES Left untreated excess pronation results in an unstable foot. With an unstable foot the little myriad muscles in the foot itself fail to work properly. This failure can end up causing, or at least contributing to,  hammertoes and bunions. For a discussion of bunions please see my page on >

BUNIONS IN KIDS. A special form of bunion is that seen in children. I have seen and treated bunion in kids as young as 4 years old. Cleary every so-called juvenile bunion, except one, I have had the chance to examine is in a child who pronates excessively.

CORNS AND CALLUSES With bunions come corns and calluses.

WHAT TO DO ABOUT FLAT FEET

Well to paraphrase the Henny Youngman school of medicine (Patient: "Doctor, it hurts when I do this". Doctor: "Don't do it") If your feet hurt to pronate the keep them from doing it.

Here are some ideas for treatment for excess pronation:

3. Over the counter shoe inserts. Yes, even I as a foot doctor will tell you that, at times, a simple store bought insole can help you with you excess pronation. Often times        it is resolves the symptoms even if it does little to reduce the pronation. I cannot argue with symptom reduction but it is better to control as much of the pronation as            you can.